Mario leaves the Mushroom Kingdom to prevent a forced marriage between Bowser and Princess Peach. The game introduces Cappy, a spirit that takes up residence in Mario's cap.

Super Mario Odyssey enables players to explore expansive worlds, which are sailed between on the Odyssey, a hat-shaped airship, with a full-fledged moveset.

In keeping with the hat theme, Mario's cap can be thrown, both straight in front of him and in a lateral spiral, hovering and returning to Mario's head like a boomerang. Mario can also put the cap on other characters and objects to possess them.

Super Mario Odyssey abolishes the lives system of previous titles in the series. Dying only subtracts 10 Coins, which are now used as actual currency, from Mario's funds.

Wedding-themed amiibo of Mario, Peach, and Bowser were released with special functionality for Super Mario Odyssey. Additionally, all other amiibo are compatible with the game and can be used to obtain special items or outfits. 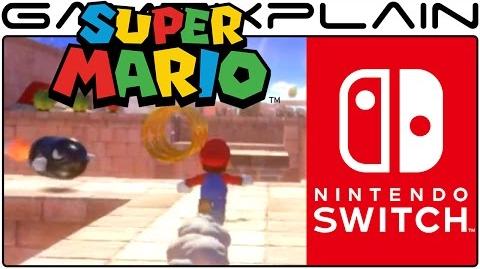